I’m not sure we’ll see a English Premier League season like 2015/2016 for many years, but this season may be the most open… 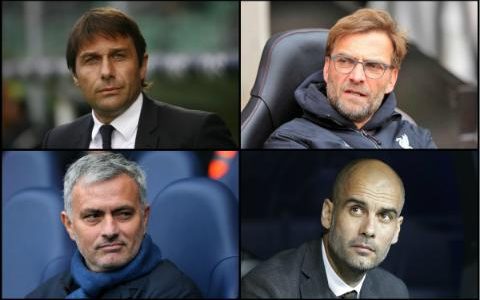 After last season’s madness, it isn’t surprising that the managerial merry-go-round has been in full swing. With Manchester United finishing fifth, and 15 points off top spot, LvG was given the boot and replaced by Jose Mourinho. The gap then left at Chelsea was filled by Antonio Conte. Pep Guardiola is now at Manchester City, Jurgen Klopp is starting to build the side he wants at Liverpool, Claude Puel is at Southampton, Ronald Koeman at Everton and David Moyes is at Sunderland. WOW…. and yes, Arsenal still have Wenger.

This got me wondering, with some of the best mangers all at Premier league sides – will this be the most hotly contested league we’ve seen?

I think Manchester United could be favourites this year, for many reasons.  Whether you like Jose or not, we’ll all agree he’s a brilliant manager. He has superb tactics and is a fantastic man-manager.

He’s already made the signings of Eric Bailly from Villarreal to strengthen his defence. In midfield he’s bought Henrikh Mkhitaryan and up front he’s brought in Zlatan Ibrahimovic. There’s strong possibilities that Paul Pogba and Blaise Matuidi may join the midfield too. Let’s not forget Luke Shaw will be returning from a long injury lay-off which will feel like a new signing.

Jose is building a unbeatable side, he hates losing to Pep, so will make sure he finishes above United’s noisy neighbours and most importantly – thanks to LvG, United don’t have Champions League football to distract them. I’m not sure he’ll take Europa too seriously.

Watch out for the Red Devils this year.

City finally got Pep Guardiola. They wanted him when he left Barcelona but he chose a sabbatical and then a trip to Munich instead. Now that they have him, many players want play in rainy Manchester. Nolito has already left Celta Vigo for the sky blues, as has Ilkay Gundogan. Guardiola is now in hot persuit of 40 million pound rated winger, Leroy Sane.

We all know what Pep will bring to the Premiership. Tactical, possession football. Can he do it with this City side? I’m not sure, but the open wallet sure will help.

I’m really excited to watch Chelsea this season. I don’t normally like the brand that Italian managers play, it’s usually very defensive and protecting a one goal lead. But Conte hasn’t seemed to have bought into that philosophy. His Italian side at the Euro 2016 tournament seemed to be attack minded – and with the likes of Hazard, Pedro, Oscar and Willian playing in front of the protection from new signing Kante from Leicester, we could see the Blues blowing teams away.

They haven’t done too much business this transfer market as yet, with the signing of Marseille forward, Michy Batshuayi being the only newcomer thus far. This won’t be their only signing, so keep an eye on Chelsea.

Arsenal, Spurs and maybe Everton under Koeman could all do well this coming season. Do I see them winning the league? No, but they will take points off the top sides and fight it out for that Champions League spot.

Who’s your favourite for this coming season? Does anyone think Liverpool will make a title challenge?