The retirement of Jean De Villiers is not only going to leave a massive hole in the Springbok midfield but so too in the hearts of rugby fans the world over.

I’ll admit that over the course of the last couple of months I have been moaning about Jean De Villiers and his seemingly untouchable position in the Springbok side.

But now that he is no longer a part of the SA rugby fraternity – I will be among the first to admit that we will miss him. 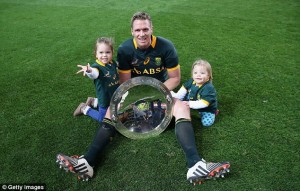 Was he guilty of playing a season too many? Perhaps, but in his prime, Jean was peerless on the rugby field. He was big and strong, he was quick and he was just so damn nice that it was impossible to dislike him (I am sure Bulls supporters will attest to this?) – the kind of player that we will more than likely tell our kids about one day when we’re watching the Boks or WP.

Speaking of memories – what are some of the Jean De Villiers memories that have stuck in this writer’s mind?

This one is bittersweet for me but during the 2012 Super rugby season – the Stormers won a massive 14 of 16 games, topped the log and booked themselves a home semi and possible final in the process. Their opposition in that semi was the Sharks – a team who had ended the regular season sixth and had scraped into the playoffs – only to have to travel to Brisbane to take on the defending champion Reds.

They were given no chance and even if they did win, they’d then have to make the flight back to SA to take on the Stormers at home. No chance.

Well the Sharks beat the Reds and the Stormers and marched on to the final. This picture featuring JdV and Keegan Daniel (another awesome dude of SA rugby) is one that has really stuck in my memory. 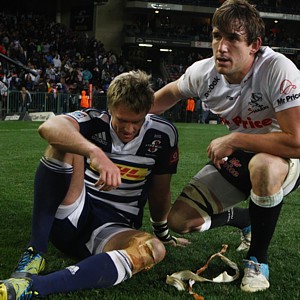 Jean and Jacque combined for a record number of 29 tests and in their hey day were lauded, the world over, as one of the greatest midfield combinations of the modern era. As a massive fan of Dewet Barry and Marius Joubert – it’s tough for me to say this but I must agree – these guys just complemented each other brilliantly. One was a distributor while the other was a hard running, backline marshalling maestro.

Perhaps we have a new winning combo in DdA and Jesse brewing however?

Like many SA players who had come before him and many who are still to come – JdV was just the king of intercepts in his day.

He had killer instincts and amazing acceleration. With those tools he was able to anticipate play brilliantly, snatch the ball and then totally destroy any chasers with his speed.

Watch this video and reminisce with me.

Anybody catch how Tony Johnson (the Kiwi RWC commentator) called out SA as intercept wizards?

If there was ever a blip on his career, even in his prime, this was it – Jean De Villiers was unfortunately injury prone.

I remember a game against the USA at RWC 2007 when Jean pulled off an amazing offload only to go down with a shoulder injury. Then there was the horror knee injury during last year’s showdown in Cardiff. We also shouldn’t forget his debut against France in 2002 where he lasted all of 5 minutes before getting stretchered off with a knee injury.

But JdV matched each and every injury with a dogged desire to get through it, get back out there and play for the Springboks again – that’s just what he did. Time and time again. How else do you think he managed to play 109 times for the Boks?

Strength of character – a quality that undoubtedly contributed to his candidacy for the captain’s armband.

During 2013, JdV turned back the clock and put in a tremendous showing for the Springboks scooping the SARU player of the year award for the second time – a fine accolade for a player of 32 years old.

There you have it – any other memories we have left out? What’s your favourite memory of JdV? Hit us with a comment below or a tweet on @leftbacks – you know how we love our banter.