The cat is finally out the bag – Ottis Gibson has been given the top job in SA cricket – but was the cat ever in the bag to begin with?

Cricket South Africa have finally confirmed what has been known by the public for about three weeks, Ottis Gibson, 48, is the man to take the Proteas to the 2019 World Cup in England, provided everything goes according to the contract that CSA have offered to him, which will run from mid-September to the conclusion of the ICC World Cup. 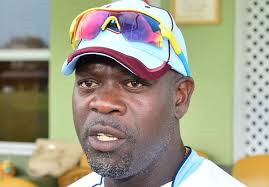 ‘’I have spent a number of happy years in South Africa as a player and I am now looking forward to return as a coach” said the former West Indian all-rounder, after it was officially announced that he’ll carry the hopes of the nation to finally win that elusive ICC tournament. As a former Border, Gauteng and Northern Cape player it was probably all red roses and blue violates for him, but now as a coach, in a country where transformation is top of the agenda for CSA and the government, something Gibson won’t be familiar with, he will have to grasp that sooner than differentiating between a BBQ and a braai.

The man who took 10 wickets in an innings for Durham against Hampshire in 2007 will have one less thing to worry about, since the AB de Villiers saga has been resolved. The opening partnership in the test team will be amongst the things that might give him a few sleepless nights, the Proteas are desperate to find an opening partner for Dean Elgar.

Gibson’s first challenge will be against Bangladesh on the 28th of September, here in SA. Bangladesh, a team that’s currently on a high after creating history by beating Australia for the first time in test cricket, they won by 20 runs. Ottis will have to use that series to stamp his authority and get the side singing from the same hymn sheet. He won’t have much time to get the Proteas playing the brand of cricket he wants before we potentially* have to face India in December. *The series is yet to be confirmed.

Creating a good environment and getting the players to relate to his style of play will be the first thing Gibson needs to do, as we’ve seen what happened to Anil Kumble with the Indian team, the players can show the coach the door if there’s a player-coach breakdown.

Personally, I’m quite excited to see how we perform under Gibson. One thing is certain, he will be firm with the players and there will be no doubt who is in charge. There were many reports that Russell Domingo was not much of a leader. He was close with the players and more of a friend than a boss and it showed when the players did as they liked. This will not be tolerated under Gibson’s reign and I can’t wait to see the results.