Now it’s time to put the Lions under the proverbial spot light and hazard a guess at how their 2017 season is going to turn out based on the players, coaching staff and fixture list.

There’s no two ways about it – 2016 was the Lions’ year. They enjoyed a fairytale season and probably should have ended top of the table (were it not for a Jaguares result that didn’t go their way). In spite of finding themselves with a tougher route to the final – they still managed to beat the Chiefs, Crusaders, Highlanders and the Blues along the way to participating in their first final were they went down a red hot Hurricanes side.

In 2017, the Lions find themselves in the Australian conference which is sure to be far easier. Their season starts off with a string of home games before they head off on a tour that is just about as good as it gets – playing the Rebels, Force and the Brumbies (last one is a toughie). This also only happens in mid April so plenty of time to build up a head of steam on the log before then.

Have the Lions boardroom staff done anything new and innovative to get supporters to Ellis Park? One can only hope as attendance was definitely a blight on the Lions’ season last year. 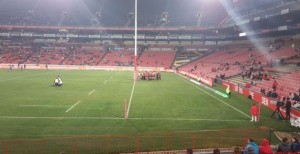 At the start of the 2016 season – the Lions squad was largely an unknown quantity. While a couple of the guys had plied their trade in the Currie Cup and in previous Super Rugby seasons – opposition knew precious little about the Joburg outfit and the Lions used this to their advantage.

This appears to be the same trend in 2017 with no real noteworthy player movements at the union. The team still has a relatively unknown feel to it. Is this intentional? Does the union purposefully turn to young, inexperienced and possibly more affordable staff rather than trying to lure big names to the union in the off season? I suspect that might be the case.

While, a number of the 2016 crew went on to earn their first Springbok caps during the 2016 season and this will do wonders for the perception of the larger squad – I personally feel like the Lions needed to try and make one or two big name signings for the 2017 season. This year, even though they find themselves in the easier pool, opposition teams will not be surprised by them and I think this may lead to their undoing in the context of chasing real silverware.

Sure guys like Combrinck, Du Klerk and Whiteley have become household names but I still feel like it won’t be enough.

Similar to the Bulls, the Lions are well settled here and have a great coaching pair in Johan Ackermann and Swys De Bruin. Certainly the best tacticians in SA – one can only hope that they have rel-ooked at their strategy and realised that what worked in 2016 might not work in 2017.

Ackermann and De Bruin will eventually become Springbok coaches so it’d be wise for the union to start looking at who else they can start grooming for the role.

Much like the Sharks, considering the draw they have received, the Lions should make their objective topping the overall log (not like last year) and reserving safe passage to a home semi. In light of this, the battle between the Sharks and Lions will be interesting since they are both on an easy track and the objective above is a possibility.

That said, while I certainly see them qualifying out of their pool – I don’t have high hopes for the 2017 season. I feel like the Lions will be a little easier to read and will also be (due to the conference system) a little underdone when they take on a kiwi side in the play offs.