Pierre Spies’ announcement that he is going to call it a day really stuck with me. Spies is a guy with all the talent in the world and despite playing 71 tests – it’s unlikely that we’ll recall his name as a Springbok legend when chatting around the braai in 20 years time. And he’s not the only one.

South Africa, in my opinion, has the greatest talent pool in the world – without a doubt.

While we will never struggle to find players good enough to go toe to toe with the best in the world – every now and then, a real star emerges. Guys that jump to mind (from recent memory); Schalk Burger, Jean De Villiers, Victor Matfield, Fourie Du Preez, Bryan Habana and Bakkies Botha and if you want to cast your mind further back we have Danie Gerber, Carel Du Plessis, Francois Pienaar, Joost Van Der Westhuizen and Naas Botha. And many many many more.

But somewhere between the two – a third type of player arrives; one that has prodigious talent but never quite manages to etch their name in Springbok infamy.

Today, we are going to look at a couple of these. 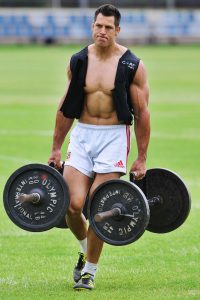 Pierre Spies’ washboard abs probably mean that he has had to forgo beer for most of his adult life but the result has been an athlete worthy of Mount Olympus Olympics. Spies is one of those rare breeds that is able to marry speed and power and this has resulted in some coaches even playing him on the wing. Unfortunately however, for all of his strengths he tends to throw on a cloaking device when a game gets tight and this led to his local career fizzling out and eventually disappearing from the Springbok selector’s radar.

Shark supporters might want to look away for this one, but in my opinion, Frans Steyn has yet to live up to his Springbok potential. Steyn combines size and power with a cannon boot that makes three points an option from up to 60 metres out. Still the youngest player to win a Rugby World Cup, Steyn’s problems, however, are versatility and attitude. I rate him highly – he is a once in a decade player but since he left our shores to ply his trade in France – he has never been the same again. He’s only 30 though so there is still time?

Andries Bekker is 6ft11 and another supreme athlete. His speed and hands are unbelievable for a man his size however – largely due to injuries – he has never been able to bed down a permanent spot in the match day 23. While SA churn out top drawer locks – it is still a pity because he could’ve added tremendous value.

If you are a Sharks supporter – this is another one that is going to sting a bit. Pat Lambie has been a part of the Springbok mix for 7 years, amassing 56 test caps and scoring 153 points – yet he has often been the victim of his own versatility. For the longest time, coaches on the local and international scene seemed to differ on where he should play – 10 or 15 and not until recently, did he make it clear that pivot is where he wanted to ply his trade. Also, Lambie has become somewhat injury prone and this doesn’t help. At only 26 years old and 7 years worth of experience, Lambie should have played many more games for the Boks. But hasn’t.

In the case of Brussouw and Lambie – (un)selection has had a large role to play. For Brussouw, the only coach who thought he was good enough to play for the Boks was, to his credit, PDivvy; Heyneke thought he was too small, Jake White didn’t believe in fetchers and Allister Coetzee doesn’t know what he is doing. It’s very sad to look at a guy like David Pocock and see the value he has added to the Wallabies cause – that could and probably should have been Brussouw for the Green and Gold. 22 caps is hopelessly too few for a talent like his.

There you have it, 5 super stars that have underwhelmed during their Bok career. We could have probably made the list even longer, guys like Brent Russel, Johan Goosen, and others just didn’t make the cut. Any that you can think of? Be sure to hit us with a comment or a tweet @leftbacks.