When is the IRB going to do something about the shocking state of officiating in the modern game of rugby? Having just sat through what was potentially the most frustrating 80 minutes of refereeing since the infamous Bryce Lawrence incident of 2011 – I feel I can say with total confidence that Rohan Hofmann delivered an inept, one-sided performance. 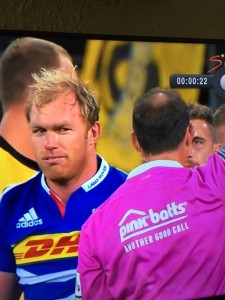 Sure, the Stormers weren’t good enough – any team that goes down 25 – 3 probably doesn’t deserve to win. The guys really need to be better right from the kickoff if they ever hope to seriously compete in this competition.

That’s a side issue though, one that we won’t be addressing today.

What we want to talk about is the ref.

How is it that the IRB have allowed this rot to continue for so long? What are they doing to improve the standard of refereeing? Not nearly enough if you ask me.

In my opinion, referees need to be scored post-match and if their performance does not live up to expectations, then they should be made aware of that and then made to face some consequences.

One way this could pan out would be a scorecard system, whereby the ref is given a score out of a 100 for a game and is then paid accordingly. So for today’s performance for example, Hofmann would’ve scored 21% and if he gets paid R10 000 per game – he’d receive R2 100. After having his pocket severely affected, would he analyse his performance and be better in the next game? I think he would.

Further, they could consider citing and suspending refs if they score less than 50% for two consecutive games, with the length of punishment directly proportionate to performance on the day.

My feeling is that this process also needs to be public – supporters want to know what is being done about the situation.

I think the IRB have to ask themselves who the most important stakeholder is in the game of rugby.

I know the answer: it’s the supporters

We are the ones who wake up early, go to bed late, buy supporters’ jerseys, pay premium pay TV subscriptions just to have the privilege of watching sport, visit the stadium and more – all with the hope of catching a good game of rugby, only to be robbed by the least important person on the field on any given match day.

It’s an absolute joke and if the IRB doesn’t start doing something about it, it’s going to cost them supporters.