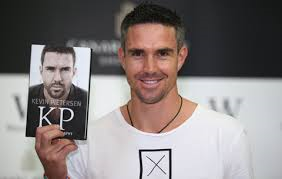 Where do I start? I’m not even sure. Well, let’s get this out of the way first…. I am a HUGE Kevin Pietersen fan and have always agreed with everything he’s done in the past. I think he had every right to leave South Africa when he wasn’t selected for the Natal side and I loved to see him score centuries. I had the privilege of being in England, and at the Oval, to watch him score THAT century (158) against Australia to win England the Ashes in 2005. 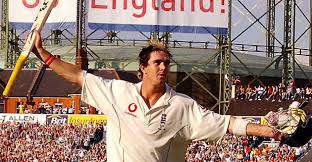 As for the book itself; it could be summed up in two simple words: Bitch Fest. KP has never been one to shy away from conflict or to keep quiet and let something slide, and this book is no different. Can you blame him though? No.

He has every right to defend his name, after having it dragged through the mud for years. His main targets in the book are England coach, Andy Flower, as well as former wicket-keeper, Matt “Big Cheese” Prior.

The sections on Prior, to me, are absolutely hilarious! KP talks about Prior naming himself “The Big Cheese” and the paragraph on that is fantastic.

I just find the thought of Prior saying all that very amusing. There is also a section where KP prints out texts between him and Cheese – which is a bit of a heated exchange, and slightly high-school – but laughable from an outsider’s point of view.

As for Flower, he doesn’t get a few sections, he gets most of the book. KP lays it all out about the England coach: how he takes the “headmaster” approach to coaching, how he coaches through fear and how he’s generally just boring!

Pietersen mentions how he loved teaching younger players and was rarely given the time to do so, and how Flower never wanted to include him in decisions regarding the team even though he was the senior player. There is far to much bitching about Flower to cover in one blog post, so best you get the book.

My favourite bit was undoubtedly chapter 13, where he talks about his friendships in the game, especially his relationship with the SA players. As outsiders, most of us think the Proteas can’t stand him – but it’s in fact the opposite. They all enjoy his company and have a nice ritual when he walks out to bat against them. 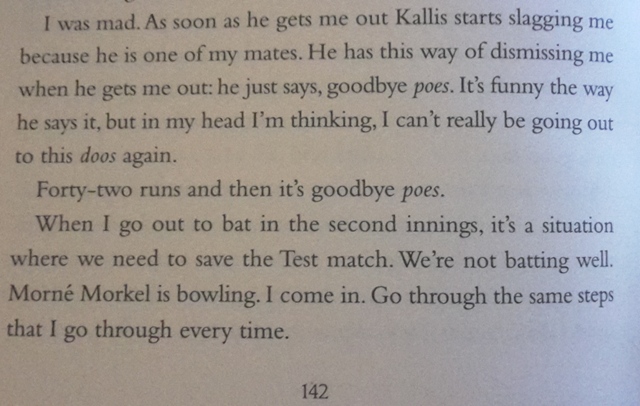 He mentions loads of friendships he has in the game. Quite a few through the IPL, which gets a number of mentions too. Look out for the email from Rahul Dravid, it’s absolutely amazing. I wont print it here, you must read it for yourself.

KP goes into a lot of detail about the England cricket board as well as the England change room. He talks about the bullying culture between batters and bowlers, and how fielders were made to apologise for mis-fields or drop catches.

As an SA fan, I can happily say that England are definitely the laughing stock of world cricket. Their dramatic fall from grace and arrogance has been a thing of beauty for South Africans, and it’s fantastic to see KP being forced out of the England side.

When we played against the Poms, I, and I’m sure millions of others, only really feared one man in their side. The man that could score a century in a session and take the match away from us in a hour or two. Now that that man is no longer a threat, England don’t have that fear factor about them. It’s like the Manchester United situation: since Fergie is out the door, no one is bothered by them.

A surprise in the book are KP’s thoughts on Captain Cook. I expected him to go hard at him, but he doesn’t at all. Instead he talks about how he actually feels sorry for him because he’s just a yes man for the board.

There were one or two frustrating things about the book: Pietersen likes to get his points across through facts, but sometimes he goes a bit over the top. Like in the paragraph below, he’s talking about how he was blamed for the team’s lack of runs. He then singles out players who failed, and includes Monty Panesar. Now to me, Monty is a bowler who shouldn’t really score runs – no need to mention him. His point was made with Cook, Bell and Swann. 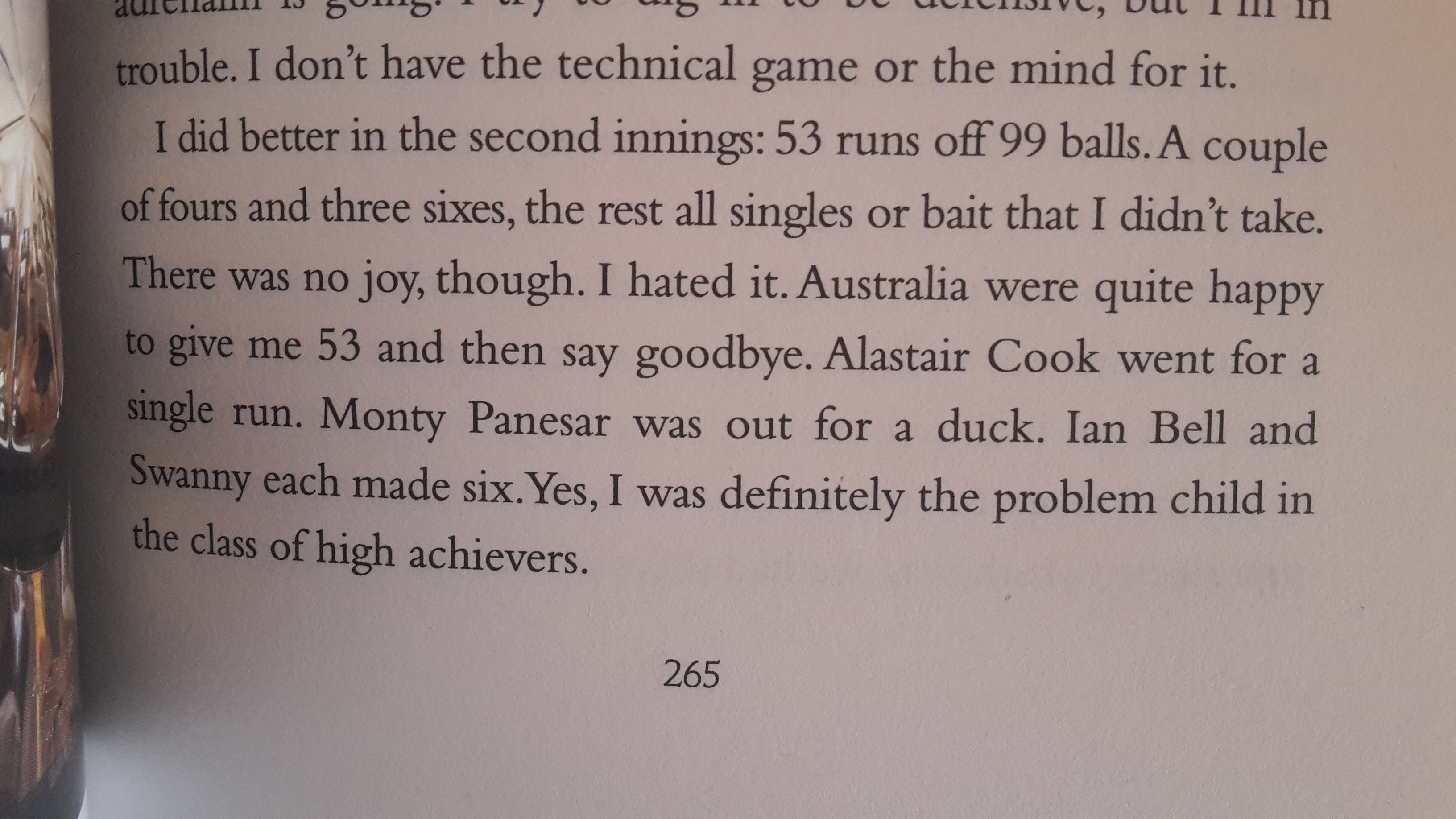 The second example is slightly more petty, but for a book that everyone knew was going to be huge, and for the price we paid to read it, I expected it to be perfect – every part of it.  On this page (below), it talks about Mitchell Johnson receiving banter from the Barmy Army. Then it says: “I remember standing at mid-on at the Melbourne Test and they started singing it as Johnson walked out to bowl”. Surely if KP is standing at mid-on, England are fielding, in which case Johnson would be walking out to bat, not bowl. Yes, as I said – it’s petty, but small things like that frustrate me (unless I’ve read something incorrectly). 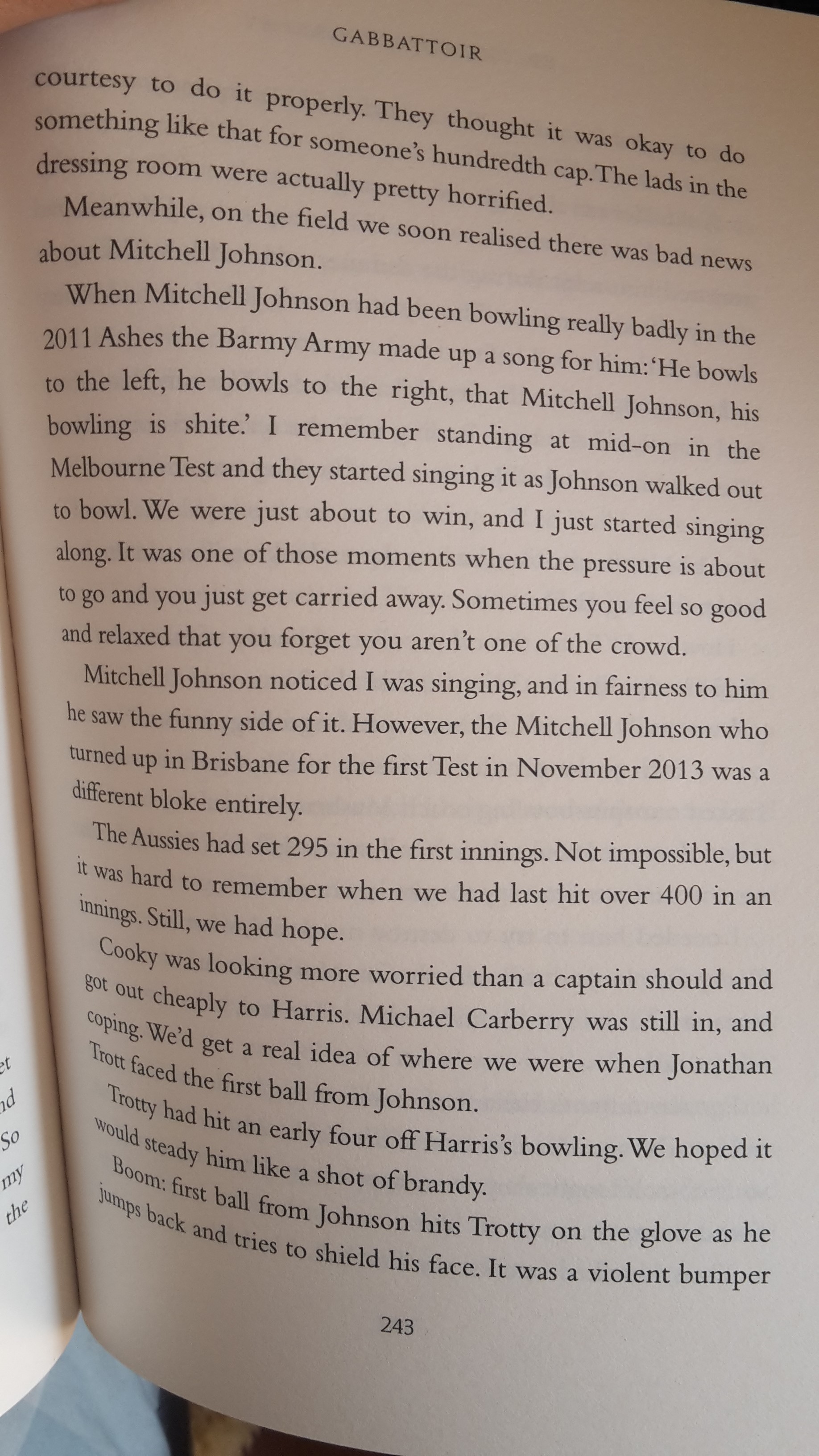 Generally I thought this book was brilliant. Absolutely everything I was expecting, it truly is no holds barred. Can KP make his way back into the England side? I doubt it. He still has many mates in the English side – but he went so hard at the board that they’ll likely be reluctant to allow him to return. But I for one would absolutely love to see him playing for England again…. after next year’s tour of SA of course.

Are you planning to read KP’s big tell-all? Let me know what your thoughts are once you’re through.