We’re pretty sure that the main topic of conversation at water coolers and lunch tables today was AB de Villiers and his superhuman efforts. 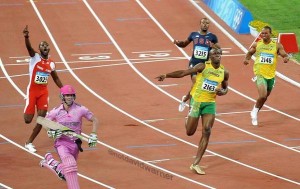 AB bludgeoned 149 runs off 44 balls and etched his name in the annals of cricketing history by smashing three individual records.

That got us thinking – is there anyone still playing the game who could match his antics? It’s a short list but let’s take a closer look…

The swashbuckling Gayle (Chris if you are reading this, you should change that Twitter handle to @gayleforce) needs no introduction to South African cricket supporters – just the other day he was taking our bowling attack to pieces.

What are the chances he’d outdo AB though? We say slim – he has the power hitting ability for sure, but he doesn’t appear to have the staying power at the crease and often throws his wicket away.

Pretty crazy to think that Virat is only 26 years old but this guy is a shot maker and can be destructive under the right circumstances.

What are the chances he’d outdo AB? Pretty good actually, if he came to the middle under the right circumstances – he could wreak havoc.

Fun fact: Kohli is yet to score a ton against SA.

Here in South Africa we have tremendous respect for the men from the land of long white cloud and McCullum is no different. McCullum, like Gayle, has the potential to rip a team to shreds at the top of the order so it’s always best to get his wicket early. In the Boxing Day Test last month, McCullum smashed 195 off 134 deliveries, we repeat…. IN A TEST.  Last week, the in form Kiwi hit a 19 ball 50 in an ODI to prove he’s in the form of his life.

What are his chances of bettering AB? Hmm, tough one – his chances probably lie somewhere between Gayle and Kohli, but what counts against him is that he is an opener and the first 10 overs can be challenging.

Maxwell, the only real all-rounder on the list, is capable of hitting a long ball – to say the least and while he hasn’t made a one day ton yet, his day is surely coming. Known as “The Big Show” down under for his ability to play shots that beggars belief, from huge reverse sweeps to ramp shots, this Aussie has it all.

Could he be the one to outdo AB? Again, if circumstances were perfect he’d certainly have a crack – but his way of batting often means he goes out trying outrageous shots.

Ok we’ll admit that we are yet to see Miller really show the goods in a Proteas’ jumper but he sure has in the IPL. In 2013, Miller smashed 101* off 54 and has developed the rather cool nickname “killer”. After his innings he casually make the remark “If the balls in the V, I’ll put it in the tree”

But can be produce anything close to AB’s performance? We like to think so. Miller has the shots, is capable of hitting the ball out the park and, most importantly, he’s South African.