One of the most perplexing aspects of Allister Coetzee’s tenure has been his personnel choices and his unwavering support of said choices in spite of poor stats, shocking results and intense public backlash. So, with his head (apparently) about to roll (yay) – it begs the question; what could a change in coach mean for team makeup in a post AC world?

It felt quite serendipitous reviewing the posts I have written about Allister Coetzee in the past. For example. in April 2016 – shortly after his belated appointment – I made some predictions on how there is going to be a wide chasm between what we hope will happen and what will. Then, on the 9th of September – I questioned what an acceptable cost was of keeping him at the helm. I then wrote about why he keeps selecting the wrong players of colour and I am sure there are heaps more. 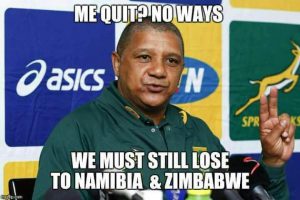 Point is, I have moaned and groaned about AC for awhile.

The good news, however, is that we are about to draw the curtain on this experiment.

Rumour has it that Rassie and Nienaber are going to coach the Boks whilst the rest of the coaching panel will fall into place over time. This changing of the guard will also come with change in players – as is often the case.

While it goes without saying that some players Springbok careers might be over permanently; Cassiem, Rhule and others at least temporarily; Skosan, Coetzee, Jantjies, De Allende – I also expect Rassie to pick as many overseas based players as are eligible. I am confident (read: hoping) that the new Bok coach’s mandate will be to pick the best players irrespective of their postal code – within the construct of the quota system – as that will still be a factor I’d say. Surely Rassie won’t ignore players like Rohan Janse Van Rensburg, Ruan Combrinck and Makazole Mapimpi?

There is no good reason for top talent like Duane Vermeulen, Frans Steyn, or Bismarck Du Plessis to evade selection regularly – if they are the best in their position. This is particularly important considering how youngsters like Dan Du Preez, Malcolm Marx and Lukanyo Am could benefit from the experience these guys bring to the table.

The reality of the current situation is that a large number of our players ply their trade overseas and we need to get with the programme.

The last, and potentially most contentious issue is the matter of Springbok captain. I am afraid that with Rassie inbound – Warren Whiteley may battle to make the team – let alone continue his run as captain. Allister Coetzee has a penchant for picking players out of position and making odd choices and in my opinion – Whiteley is one of those. Despite his strengths as a captain and his presence with the media – he is not the best number 8 in South Africa. That honour belongs to Duane Vermeulen with other more physical contenders like Dan Du Preez also in the queue. Whiteley is not as steady on defense, with ball in hand or in the scrums as the above two and in a game where size is everything – he is not the logical choice.

Just to clarify – I don’t think that Rassie is going to be perfect. However, I feel I can say with a fair degree of certainty that as an astute tactician he will make it his business to pick a team that can not only win games but build toward 2019 Rugby World Cup. Plus, there is NO way that he can do worse than Allister Coetzee.

What’s your thoughts? What changes do you think Rassie will bring about? Let us know in the comments or hit us with a tweet @leftbacks.